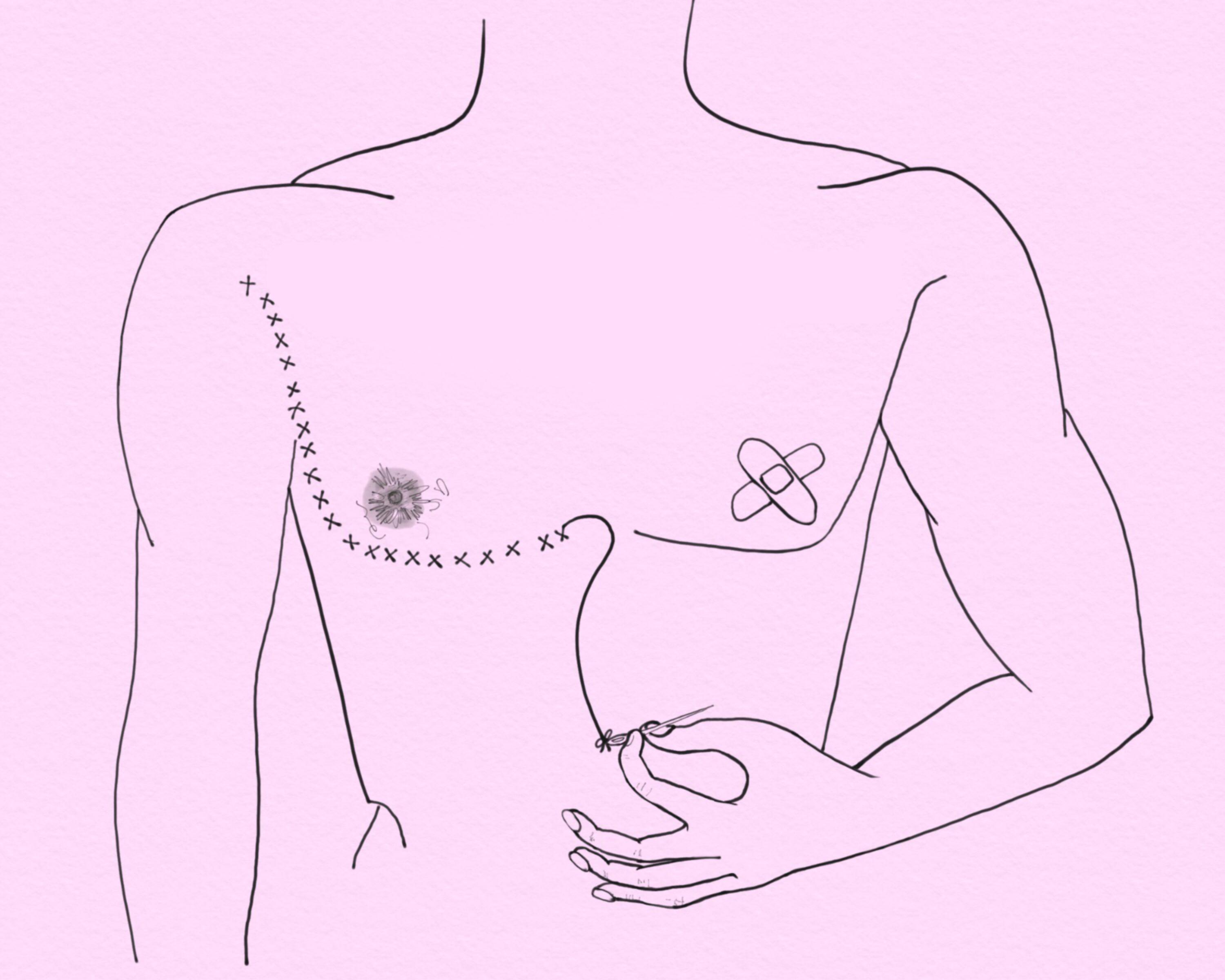 I was fourteen when I left my boyfriend for my best friend―a short, blonde-haired girl. We had been dating for only a couple weeks when I visited her for the weekend (I had recently moved a couple hours away). It only took moments after I arrived for her tongue to work down my throat. I was okay with that, kissing. But when she asked me to go further, I said no. She kept asking and asking until I eventually stopped answering. She took my silence as a yes. I spent the rest of the weekend in silence. It took me months to confront her about what happened, and even then I still blamed myself. I could have pushed her off, but I didn’t. I could’ve left, but I didn’t. I could’ve, but I shouldn’t have had to.

Between the ages of twelve to fourteen, I ritualistically imagined the scenario of being sexually assaulted whenever I was in the shower. I was a girl in an old kingdom, I would imagine, and there was a man who had me pinned to a bed. My feet were tied down and he used one hand to hold both of my wrists. He used his other hand to touch me a place I didn’t even know the name of at the time, but now I know that it was my vagina and clitoris. I kneed him and struggled, grasping and clawing at him. I escape. I run out the window, still naked. For some reason I am now dripping wet as if I had gone for a swim. I run down the streets until I run onto the palace steps. Guards yell and grab me, but the prince is walking by. He demands I am cleaned up and cared for. Afterwards he asked me why I was found naked and crying in the streets. I explain to him what I have escaped from, and he orders the man to be found and taken into custody. That is always where it ended. Every single time I would shower, this was the scenes that plagued me. I would go into the shower uneasy and scared, but come out feeling relieved.

I went to a Catholic school and grew up with very conservative parents. I was supposed to take health class in 11th grade, and till then I was merely taught in 5th grade that ‘no one should touch your bathing suit area.’ I didn’t even know what sex was, and had no words to describe what I would always imagine, but I knew that I needed to keep it a secret. I know now the imagined scene had been flashbacks put into a ‘fantasy’ world so that my brain could pretend it wasn’t real. And I remember that it began when my grandmother introduced me to her new boyfriend. He was always very kind, but he always seemed a little too close to me. He would come up and place his hands on my shoulders, hug me more than anyone else. I would sometimes move to the otherside of the room to gain space, but he always close behind. I began to shy away from all forms of physical touch. My friends even coined a new nickname for me― ‘Ghost’. The joke was that if they touched me, they would fall right through. After two years of torturous showers, they suddenly stopped. Right around when my grandmother and her now-husband moved to the other side of the country. I was seventeen, sitting in the shower, when suddenly I was twelve again. And my grandma’s boyfriend was there too. He was pinning one of my knees to the tub, with my hand stuck under it. He used one of his hands to hold my free hand, and he used the other to molest me. I remember that I was crying, but for some reason no words or screams would come out. I came back to the present, sitting cold and naked in the shower. I felt just as powerless then as I did when I was twelve. I was shaking and crying, my lungs refused to take in air. Through the next two weeks I would continue having flashbacks an average of twice a day. I grew suicidal and eventually brought myself to tell my therapist everything that had happened. She was worried that I would act on my suicidal thoughts and sent me to the emergency room. From there I spent two days and three nights waiting for a bed to open up at an adolescent psychiatric hospital. It wasn’t my first time being admitted, but I was ashamed because I thought I had overcome needing to go to the hospital. I stayed there for a week before being discharged. My therapist had called Department of Child and Young Families, as required when abuse is reported, and an investigation began. This investigation is still ongoing.

I was once comfortable using the male bathroom at school. One day I stopped to use the restroom in between classes. The bathroom was crowded but I managed to grab a stall. There was a group of three boys were standing by the sink on the other side of the door. One looked through a crack in the stall and elbowed a friend of his. “Hey look, it’s that tranny kid!” he said, one of them turned around and told him to shut up, but another egged the first on. The third boy walked closer to the stall; at this point I was terrified. He leaned into the door and stuck his eye into the crack, looking right at me. I was sitting on the toilet, frozen, pants down. “Oh yeah, definitely a she.” He laughed. At this point the bathroom fell silent, there were probably six more boys in there. I quickly pulled my pants up and opened the stall door, hoping to rush to the hallway. I was stopped by one, running smack into his chest. One behind me grabbed my ass. There was a boy washing his hands, made eye contact with me in the mirror, and gave me a pitiful smile. He did nothing, and neither did the other bystanders. I pushed the boy in front of me into the wall, and ran out.

As a victim I have faced discrimination because of my size and gender. Three months after I was raped by my girlfriend, I told my best friend everything. It was a vulnerable time for me, and I didn’t know how to process what had happened. Two boys sitting next to us in the school library smirked and turned to us. “You wanted it, you’re just trying to get the sympathy card to get laid with this chick,” he gestured to my friend. I was already crying but at this I began to sob. I didn’t hear what my friend said to them, the whole world had become a blur. This is just one example where I have been told that because I am a guy, I must have wanted to have sex with her. Both guys and girls alike have shared this opinion to me.

Sharing my experiences are not easy, but it’s becoming easier. I often will pull myself away from self blame, thoughts such as “I was strong enough to push her off, so I must have wanted it,” “I could have screamed for help,” and others where I take the blame for being assaulted. No one is to be blamed for rape except the rapist. For victims who are told that they ‘couldn’t have been raped’, told that they ‘wanted it’, or have in anyway been told that it wasn’t the rapists fault, I want you to know that you are valid. You are strong and you are capable of overcoming this. All victims deserve help, no matter what they look like, or how the world perceives them. I do not look like what people think a rape victim looks like: I am a five foot ten, 240 pound, teenage (trans) guy. People probably wouldn’t believe I am a rape victim. I am. Victims do not come in a cookie cutter mold, and it happens to people from all backgrounds. No matter what, no one deserves to be told they deserved it.